John Keats had nursed a mother dying of Tuberculosis on his school breaks, when he was only 14.  Some years later, when he was apprenticed as a medical student, he had also nursed his brother Tom until his early death.  When he was only 25, and in spite of a winter voyage to sunny Italy as a ‘cure,’ Keats himself died of this pernicious disease.  Some of his best lyric poems speak eloquently about his anxieties regarding his mortality.

With limited scientific knowledge of Tuberculosis – rampant in the 19th century – it earned the moniker ‘consumption.’ The term inferred a kind of romantic wasting: as the body was consumed by illness, the mind and soul might join in ecstatic expression through the arts. So went the myth.  In fact, many great works of art of this era – Keat’s poetry, Puccini’s La Boheme, Hugo’s Les Miserable as examples – grapple with the overwhelming crisis presented by TB.  Artists were deemed more prone to 'consumption,' whether through inherent fragility, or through the impoverishment of the 'struggling artist.'

The HIV-AIDs pandemic brought with it a resurgence of increasingly resistant strains of Tuberculosis.  Tracey Kidder’s Mountains Beyond Mountains is a moving account of Dr. John Farmer’s heroic leadership in combating the disease in the late 20th Century. Kidder’s account, however, gives lie to any remaining notions of ‘romantic consumption.’

This living hand, now warm and capable
Of earnest grasping, would, if it were cold
And in the icy silence of the tomb,
So haunt thy days and chill thy dreaming nights
That thou would wish thine own heart dry of blood
So in my veins red life might stream again,
And thou be conscience-calmed—see here it is—
I hold it towards you. 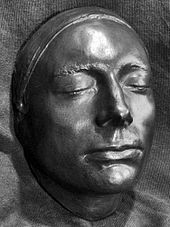